You will need a few weeks to properly explore Spain’s lush, misty, and verdant northwest corner:  a land very different from southern Spain.  This lush, misty, and verdant northwest corner of Iberia, facing the fierce Atlantic, is a place of spectacular seaside cliffs and mighty rivers gushing through deep gorges, of chestnut, pine and eucalyptus forests, of Celtic heritage, legends and myths, of bagpipes, dolmens and petroglyphs.  Romanesque and pre-Roman ruins, and stunning medieval architecture, dot the countryside along the various pilgrimage routes leading to Santiago de Compostela.  The “land of a thousand rivers” is also where you will find wild horses roaming the high Serras, dense wooded valleys with green medows, stately granite manor homes covered with blankets of moss, lively outdoor markets with bubbling cauldrons of pulpo a feira (octopus), and more festivals that one can begin to count.  There are beautiful sandy beaches and sheltered harbors flanked by towering cliffs and some 1,200 kilometers of rugged coastline with unique Rías, or low estuaries, that supply the region with an astounding bounty of fresh seafood and shellfish.

On the Route of the Wines of Galicia

Galicia is blessed with a unique mix of favorable microclimates which, along with lemon, orange, oil and palm trees, afford it’s five principal wine making regions with their own official Denominaciones de Origen, three of which we have toured in depth: the Ribeira Sacra, Rías Baixas and Ribeiro.  These three wine producing areas encompass the provinces of Lugo, Ourense and Pontevedra and are currently enjoying a growing international recognition for excellence, and we promise that once you try them, you will definitely be hooked.

Meandering in the Riberia Sacra

Using the Parador of San Vicente do Pino, a reconverted Benedictine Monastery, in the town of Monforte de Lemos as a base, we spent four intensive days touring the out-of-the-way, exquisitely rural, ancient Ribeira Sacra, or ‘Sacred Bank”, noted as such for its wealth of monastic retreats.  Without a doubt, it is one of the most stunningly picturesque wine growing regions of Spain!  The rich, rugged canyons formed by the Miño and Sil rivers are covered with steeply terraced vineyards, vines cascading down the precipitous slopes to the very edge of the meandering rivers below. The harvests here, like in the Alto Douro, require arduous, back breaking labor to collect the grapes from the steep, plunging slopes. 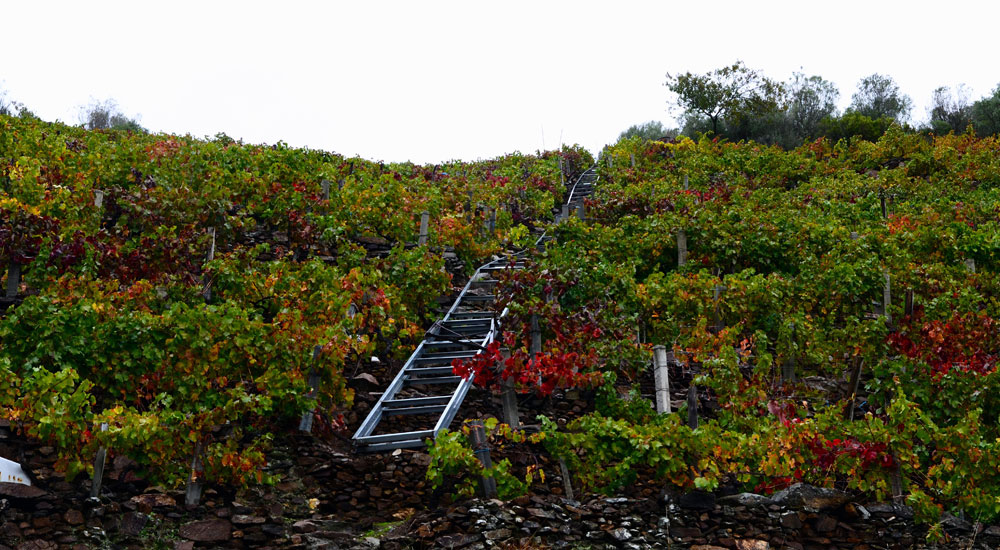 Smaller than the Rioja, but slightly larger and with an even more dramatic landscape than the Priorat, the Ribeira Sacra has been growing grapes for some 2,000 years, its terraces (bancales) dating back to the Roman occupation.  They produce lighter, lively, fruity, mineral-rich wines, primarily mencía-based reds and godello-based whites, along with fine liqueurs, or orujos.   Adegas Vía Romana  and Adegas Regina Viarum enjoy two of the most spectacularly beautiful and panoramic locations of any winery we’ve visited and are truly “must sees” for wine lovers.  The Ribeira Sacra wines continue to attract world-wide attention, and we promise that once you try them, you will definitely be hooked!

Along with winery visits, we toured the area’s vast array of Baroque monasteries and Romanesque hermitages and purchased ceramics from the artisan hamlets of Gundivós and Niñodaguia.

Road signs in Galicia can be challenging, but navigating the Rías Baixas (Lower Estuaries) region proved to be most difficult due to poor or non-existent signage.  Therefore, when touring the area, the help of a local guide is strongly advised.

Like the Ribeira Sacra, this D.O. is divided into 5 sub zones, the largest being the Val do Salnés, Salnés valley, consisting of rolling fields laced with stone and wire trellises (parrales) used to lift the vines away from the damp soil, towards the sunshine and to provide ventilation and prevent rot.  The vineyards are planted predominately with the resistant albariño grape (Spain’s most expensive), and these rather feminine wines taste intensely fruity- peach, pear, citrus flavors.

Along with the Palacio de Fefiñanes, located in the wine capital of Cambados on its handsome medieval square, we found the countryside Pazo de Señorás and Agro de Bazán to be the most charming and welcoming.  Both boast stunning Pazos, or ancestral manor homes, these usually with private chapel, garden, hórreo (stone granary built on stilts) and dovecote.  And both wineries produce delicate, aromatic wines that pare perfectly with the region’s superb seafood.

Although we based at the Parador del Albariño in Cambados, we can also recommend the elegant, Belle Epoque spa hotel, the Eurostars’ 5-star Gran Hotel La Txoa, on the pine covered island of A Toxa, as a pampering, relaxing base.

Ribeiro (Ourense province), the oldest appellation in Galicia, in medieval times, under the reign of King García I, saw its wines, the potent tostados, exported from the court of Ribadavia to almost the whole of Europe.  Ribadavia’s thriving Jewish community became rich thanks to the pre-Inquisition wine commerce.  In the 16th-century Ribeiro wine was revered throughout Europe and even shipped to America.  Cervantes described Ribadavia as Spain’s “Mother of Wine”.  But in the 18th century the vineyards suffered a sharp decline as foreign wine merchants moved on to Porto.  Then in the 19th-century a vine plague devastated the Ribeiro wine industry.

The vineyards here are situated in the deep green hills that slope down to four rivers that irrigate this pastoral land. (Ribeiro in the Gallego language meaning “River Bank”).  At his Viña Mein estate in Leiro, ex-attorney Javier Alén has been a pioneer in the renaissance of Ribeiro wines, returning to its native grapes,  and bringing the Treixadura, called the “queen of all white grapes”, on to the world’s stage. Adjacent to the winery, the owners have created a cozy and charming 8-room B&B from the original stone farmstead, which makes a delightful retreat for oenophiles.  Viña Mein also owns a strikingly avant-garde, boutique hotel, a member of the prestigious Rusticae group, in the hamlet of San Clodio, adjacent to the Monastery.

Other noteworthy wine estates to include on your Ribeiro itinerary:  The Coto de Gomariz dating from the 10th-century, and Casal de Armán, an 18th-century winery with atmospheric 6-room hotel and delightful bistro with heavenly views.

From the Ribeiro we crossed the Miño river and stepped back 30 years in time.  The Portuguese Minho, far more pristine than its Spanish counterpart, is endowed with a number of highly photogenic fortress towns with their defensive walls and watch towers intact, filled with magnificently restored churches, beautifully manicured gardens, quintas  (noble estates) and mosaic cobbled squares, along with thermal spas.  Vila de Cerveira, Caminha, Monçao and Melgaço all delight visitors with their Old World charm.

In Melgaço, gateway to the Peneda-Gerês National Park, we dropped in to sample the area’s crisp, refreshing, slightly effervescent alvarinho vinho verde.  Sampling here couldn’t be more pleasurable in the village’s Solar do Alvarinho wine center,  a showcase for these fresh white wines, along with local cheeses, sausages, honey and handicrafts, including exquisite embroidered linens.

And a visit to the northern Minho valley wouldn’t be complete without an unforgettable gourmet lunch at Adega do Sossego in Peso.  A tucked- away charmer, it serves gargantuan portions of local specialties, such as grilled trout stuffed with country ham, washed down with the house alvarinho wine, and ending with a complimentary miniature vat of their homemade digestif.

For The Sophisticated Traveler